Village Hall Car Park
The surface at the village hall car park has broken up and the whole area is being re-surfaced with the cost being met by the parish council and the village hall management committee.

Hethersett in Bloom
It is hoped to hold a Hethersett in bloom event to co-incide with village Millennium celebrations during the summer. Shops, businesses, schools and village organisations are being invited to take part.. There will be a competition for the best front garden in the village.

Rev Phil Unsworth to leave village
The Rev Phil Unsworth, village curate, has left the village to take up a new post at Blofield. Phil came to Hethersett in 1997 after retiring from teaching. During his stay in the village he was involved in numerous groups and was chairman of the Choral Society.

New Head for School
A new headteacher has been appointed at Woodside First and Nursery School. Helen Lamb took up her appointment at the beginning of Spring term and replaces Vivienne Horobin who retired in the summer. She comes to the village after four years a head of Horning First School and previous experience as deputy head in a Norwich school.

Hethersett Athletic Take Title
Hethersett Athletic Football Club men's team have become runaway winners of Norwich Sunday League Division Four B in their first season in the league. The team, with an average age of below 20, lost just two of their 24 league matches with 21 victories and one draw.

The team stepped up from youth football last season when they were runners-up in the Under-17s section of the Norfolk Youth Combination.

In a remarkable season they have scored well over 100 goals and led the division from the first to last match. The men's team has become the second side from the club to take a league title after last year's Under-11s.

Hethersett Athletic started life as Hethersett Jubilee and was affiliated to the Jubilee Youth Club. It went fully independent a number of years ago when it changed its name to Hethersett Athletic. The club's base is at the Memorial Playing Field, but it also uses pitches at the Middle and High Schools and Old Hall school.

Millennium Mugs
Special millennium mugs have been given to children under the age of 12 in the village. A number of events are being organised in the village including a carnival procession and fete on June 24th and a millennium ball at Old Hall School on July 15th. There are also proposals for a lasting memorial to celebrate the beginning of the new century. Ideas being discussed include a memorial stained glass window, millennium garden and walk, an archive record of the year.

Village Appraisal
A steering committee was formed following a public meeting in January to organise a village appraisal. Backed by the parish council, the survey will ask questions about the community and the opinions of residents.

Poppy Appeal 1999
The house to house collection for the Royal British Legion Poppy Appeal in the village raised £1,347.60.

Tuesday Club Disbands
Hethersett Tuesday Club has been forced to disband after almost 34 years in existence. It was founded to welcome newcomers to the village and as a focal point for villagers to meet and get to know one another. In the early days there was a membership of almost 100, but membership has declined so that it is no longer feasible to carry on. The small amount if remaining funds has been sent to the Salvation Army in memory of former Hethersett resident Madeline Lee, who was a salvationist and president of the club for three years until her death last summer.

Arson Attack on School - Dateline .... Friday February 25th,2000
Arsonists struck at Hethersett High School days before a scheduled visit by inspectors from the Office for Standards in Education (OFSTED).

The blaze, which took place when the school was closed for half-term holiday, left two information technology rooms containing 20 computers, the sports hall, two history and geography blocks and the toilet blocks badly damaged by smoke.

The Fire Brigade and Police were alerted after one of the teaching staff saw smoke coming from the school. They attended the school at about 9 a.m. It is likely the fire was started in a wheelie bin full of paper. The fire spread into a corridor which links the computer rooms and the sports hall and toilet block.

The wheelie bin in question was full of re-cycled paper and was kept outside the school kitchens, some distance from the scene of the fire. The fire was under control shortly before 10 a.m.

As a result of the fire the OFSTED inspection was postponed and a number of children were unable to attend school after half-term. The damage caused runs into thousands of pounds and temporary classrooms are being put up in the short term.

The school celebrates its 21st birthday this year and has about 600 pupils from the village and surrounding areas.

Firefighters from Norwich, Hethersett and Wymondham were called to the scene at around 9 a.m. The fire was under control by 9.55 a.m.

FOOTNOTE: A 12 and 13 year old have been charged with offences regarding the fire and have appeared in court where they were given unconditional bail until April.

Speed Limit Supported
Hethersett Parish Council is supporting a proposed 50 mph speed limit along the B1172 beginning at the Thickthorn side of Station Lane and finishing at Planet Farm. The council is also supporting extending the speed restrictions as far as the 40 mph limit into Wymondham.

The council is also expressing its concern at the increase in heavy traffic which will be brought about in Colney Lane with the opening of the new hospital. It is also supporting a direct public transport link from the Hethersett and Wymondham areas to the new hospital. 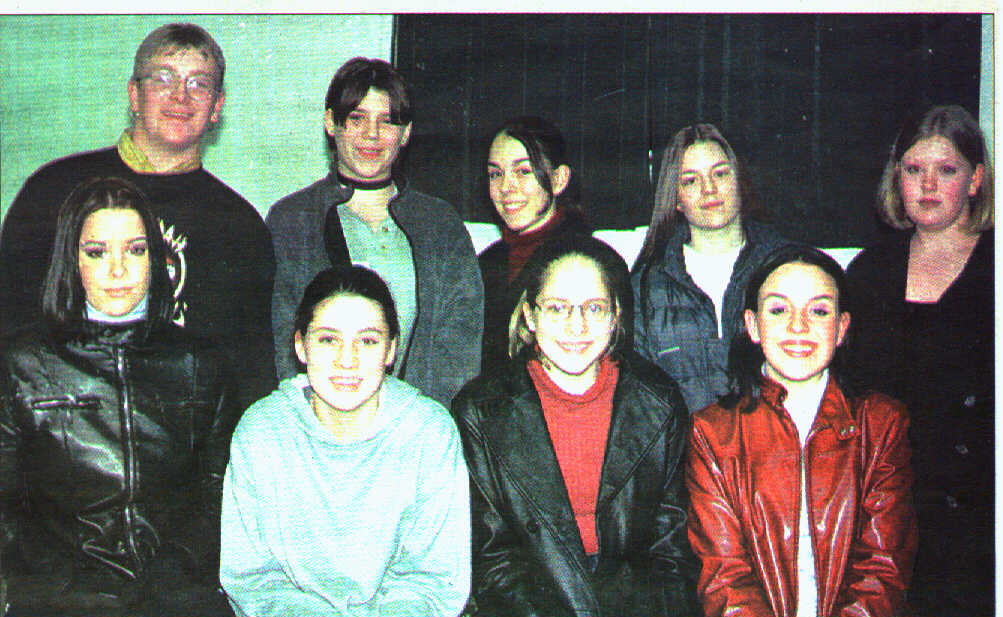 Youth Council Gets Down To Business
The first meeting of the newly elected youth council has taken place. Hethersett is the first place in Norfolk to have a youth parish council. Members, who are aged between 13 and 18 and who all live in the village, agreed their aim was to be a voice for the youth of Hethersett.

Vicky Poole, aged 17, of Firs Road was elected chairwoman and led a two hour meeting during which discussions included the need for more street lighting, litter bins, basketball facilities, seating and a cashpoint machine in the village.

The youth parish council's immediate priorities are to help make the youth club more attractive and better used, to promote use of the basketball facilities at the rear of the village hall by suggesting free use at certain periods and to improve the facilities for young people at the Memorial Playing Field, particularly the lighting and seating.

The youth parish council is assisted and supported by the parish council, which has awarded them a grant of £250 for the first year's running costs.

The Hethersett Pantomime Committee has also given a grant of £50.

The next meeting is on April 4th at Hethersett High School. It will include plans for a Hethersett Youth Celebration of the millennium and the need for a new facility for BMX/skating.

Members of the youth council in the photograph are Kaye Benfield, Elena Brown, Christina Dowson, Andrea Leggatt, Vicky Poole, Sarah Reynolds, Alison Utting, Rachael Utting and Sam West. Adam West was not present when the photo was taken and Annika Olsson was co-opted at the first meeting.

Millennium Yew Tree
A new millennium yew tree will be planted in the churchyard of St Remigius on 6th May. The three year old tree is one of over 7,000 new trees provided by the Conservation Foundation as part of a scheme to mark the third Christian Millennium.

About four years ago the Foundation began taking slips from a number of trees that have been dated at least two thousand years to the time of Christ's birth. Many of the selected parent plants are 3 to 4000 years old. The Hethersett tree comes from Old Enton Yews in Surrey and is thought to be at least 2000 years old. It is hoped the tree will still be there when the next Millennium is celebrated!

Threat To Local Facilities
Hethersett Parish Council has written objecting to proposals to close the local branch of Barclays Bank on April 7th. The council has also raised its concerns about the threat to Hethersett Post Office by the change in the payment system of state benefits, which could mean a loss of 40% of the post office's business.

IN SHORT......
A quiz evening held by Friends of Woodside First School raised £250.

The charity shop in the village has presented a further cheque for £30,000 to MacMillan Cancer Relief. This brings the total amount raised to £140,000.

Residents have been concerned about low flying military aircraft over the village.

Norfolk Constabulary is looking to help set-up more Homewatch schemes in the village.

Children of the Methodist Church Sunday Club raised £115 from a car wash and bring and buy sale. The money will go towards church funds.